CHARANGUISTI NIGHT
Sarzana (SP)
Exceptional appointment on December, Friday 6th at the Armadillo Club Auditorium, Multipurpose Cultural Center, former old market, in Via Terzi in Sarzana. An entire afternoon and evening dedicated to Latin American music and to the Charango, a splendid small stringed instrument of the South American tradition. The event is under the patronage of the Ministry of Foreign Relations of the Republic of Argentina. 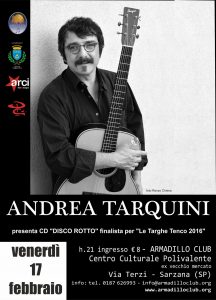 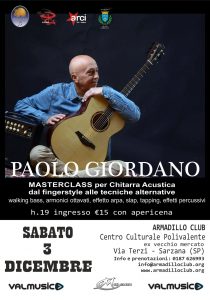 ACOUSTIC GUITAR MASTERCLASS held by PAOLO GIORDANO
2016, December 3rd
The Piazza De André Laboratory, Folk Music Meeting, returns in the Sarzanese summer, continuing to enrich the its path with different variations of music and traditional instruments. An occasion for some good music, rhythms, research and innovation.
Here is the program of the 2018 event: 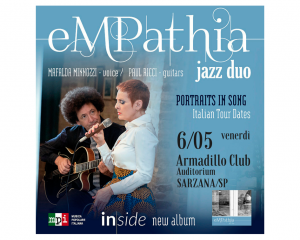 “EMPATHIA JAZZ DUO”
2016, May 6th
In 2015 Mafalda Minnozzi and Paul Ricci brought together their musical experiences in eMPathia Jazz Duo, a special meeting of cultures and influences to propose a sound that immediately conquered the public, both in Brazil and in Italy. The Italian tour of the duo created to promote the first CD (eMPathia Jazz Duo MPI / EGEA 2015) receieved many reviews and interviews in specialized magazines as well as the candidacy for the prestigious Targa Tenco as “best interpreter”.

“RIVER BLONDE”; Groovin’blues – roots’n’roll
2016, April 29th
The duo is formed by Stefano Tavernese (vocals, electric, acoustic and resophonic guitars, various stringed instruments) and Guit-Armando Serafini (percussion, guitar). Their show has a high rhythmic and sonic gradation that ranges from traditional music from the banks of the Mississippi to contemporary rock, sometimes contaminated by a touch of Celtic melancholy or characterized by a rousing beat worthy of an African dance. 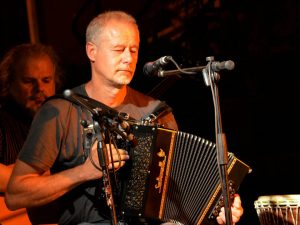 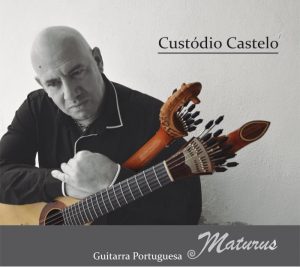 CUSTODIO CASTELO (Portugal) – “The guitar and Portuguese music”
2016, April 15th
Custodio Castelo is today the main standard bearer of the Portuguese guitar tradition in the world. In his career he accompanied the greatest fado singers, starting with the legendary Amalia Rodrigues, and then Ana Moura, Misia, Cristina Branco, Mafalda Arnaulth, Mariza, MargaridaGuerreiro and many others.
He is now launching his new album Maturus, recorded with a unique guitar in the world, the Siamese guitar. Built by luthier Oscar Cardoso, it was named after it combines the guitar from Lisbon and Coimbra in the same sound box. 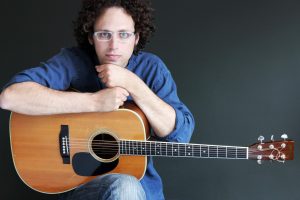 GIACOMO LARICCIA (voice and guitar)
2016, March 11th
Giacomo Lariccia’s story is the story of a musician who leaves Italy and finds America in Europe. Globetrotter with guitar on his shoulder, he finds the right environment in Brussels to cultivate a passion for jazz. Suddenly, after years of notes, weird solos and out of tune ties, he discovers the power of the word.
Lariccia singer-songwriter is born, and in 2012 he willl be considered as one of the four finalists for the Premio Tenco.

MASSIMO DONNO & RICCARDO TESI in “PARTENZE”
2016, February 4th
“Partenze” is a show of songs that tell of a journey to the South. And it is the South itself that represents not only a well-defined physical / geographical place but a metaphor of landing and departure, where the South is also Africa, the ‘Latin America, the East. The focus of the album is Migration, in all its characteristics, even the most hidden. 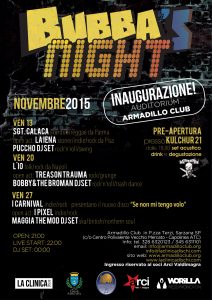